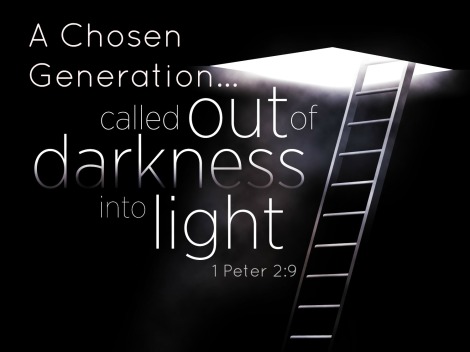 This Article Originally ran in April of 2012 on the achosengeneration blogsot.
By Angel Edwards
Mediocrity plagues this world.  The worst part is that we are blind to it. We feel as though we were meant to live here day to day doing what society demands of us. Actually, the opposite is true. Christianity was NEVER meant to be ordinary. What’s a normal Christian anyway? Trick question….there is no such thing, at least, there shouldn’t be. To be a “normal” Christian is to have “accepted” Christ into your life. The difference between ordinary Christianity and radical Christianity is that Christ becomes an all- consuming fire placed in the center of your life.  Nothing is done without Him.
Haggai was a prophet who carried this specific message of God’s to the Israelites. Prior to the book of Haggai the Jewish people were taken into exile by the Babylonians. Haggai opens with their returning back to Jerusalem after many years of captivity. Once they had returned home they began to rebuild the temple since it had been destroyed by the Babylonian king . Even though Israel had started the rebuilding process they soon gave up.  The Lord saw this and spoke to Haggai:

“Thus says the Lord of hosts: These people say the time has not yet come to rebuild the house of the Lord.”  Then the word of the Lord came by the hand of Haggai the prophet, “Is it a time for you yourselves to dwell in your paneled houses, while this house lies in ruins? Now, therefore, thus says the Lord of hosts: Consider your ways. You have sown much, and harvested little. You eat, but you never have enough; you drink, but you never have your fill. You clothe yourselves, but no one is warm. And he who earns wages does so to put them into a bag with holes.” – Haggai 1: 3-6

God’s children neglected Him. They desired only to satisfy themselves. They would eat, drink, and clothe themselves continually but it was never enough for them to be content. In order to fill themselves they tried to accommodate more things. They stopped looking at God as the provider and relied on their own devices. They attempted to fill the void in their hearts by themselves. They lived in “paneled houses” while the Lord’s house laid “in ruins”. The people were living to their fullest while God’s glorious temple was desecrated at the center of the community grounds.
God saw the heart posture of His people. He desired for them to see that He was the satisfaction they needed. They were blind to the truth. The best part is that this truth still stands today. God hasn’t changed and neither has His heart for us nor His desire to fill us.
It sometimes seems easier to pursue the things of the world. These people would say, “…the time has not yet come to rebuild the house of the Lord (1:2).”  To build a temple consists of hard work.  It’s hard to lay down your own life for Him. It’s hard to live set-apart from everyone else around you.  While we start to follow Him, while we start to do His will, while we start to rebuild the broken temple, sometimes we lose motivation and walk away. We begin to set our priorities above Christ.

“Who is left among you who saw this house in its former glory? How do you see it now? Is it not as nothing in your eyes?” – Haggai 2:3

The people once knew the former glory of the temple where Gods’ presence resided. They walked away from the Lord’s work and became numb and disconnected from it. This is a direct correlation to us as the temple. We believe that if we try hard enough we can provide our own way. We can’t. You are the temple. He longs to make His temple- YOU- glorious in order to be glorified. Although we as frail humans can fall so easily God is so much greater.  When He promised them He promises us now:

God is saying that it is not too late to come to Him. If you decide to perform for God or do your own thing, know that without a heart turned to God nothing will ever produce from the work of your own hands. This is what Haggai communicated to the Jews.

“So is it with this people, and with this nation before me, declares the Lord, and so with every work of their hands. And what they offer there is unclean”. – Haggai 2:14

All of this brings me to my next point. Perhaps your reading this and thinking, “My heart is numb to Him. Why should I care to center my life on Him?” Although you may think you are alone God knows what you’re going through and what you’ve been through. He has never left you. He has so many mysteries He longs to share with you. He wants you to search for Him. Within the past year I have heard people say that they spend time with God when He calls them to. I don’t believe this is how it’s supposed to work. God wants to be everything to us because this is His love for us. We are to spend time with Him even when we don’t desire to. God sees our hearts and our faithfulness to Him. “The one who spends time with God knows God.”- Mike Bickle, Founder of IHOP
I challenge you to ask God to reveal who He is. Ask Him for understanding. Ask Him for revelation. Ask for your heart to be on fire for Him. Ask Him to help you love Him. Do not be afraid to ask love for love. This is why He created you. Meditate on the scriptures below. Each of them are about seeking, questioning, and pursuing God. I guarantee the Lord will speak many powerful things to you through them.

…..
Psalm 34: 4-5
I sought the Lord, and he answered me
and delivered me from all my fears.
5 Those who look to him are radiant,
and their faces shall never be ashamed.
…..
Matthew 7:7-11
“Ask, and it will be given to you; seek, and you will find; knock, and it will be opened to you. 8 For everyone who asks receives, and the one who seeks finds, and to the one who knocks it will be opened. 9 Or which one of you, if his son asks him for bread, will give him a stone? 10 Or if he asks for a fish, will give him a serpent? 11 If you then, who are evil, know how to give good gifts to your children, how much more will your Father who is in heaven give good things to those who ask him!
………………………………….
Check out this awesome video about devotion to Him!
http://www.youtube.com/watch?v=b0jbBlcWzyk
You are A CHOSEN GENERATION: Set-Apart for His Glory