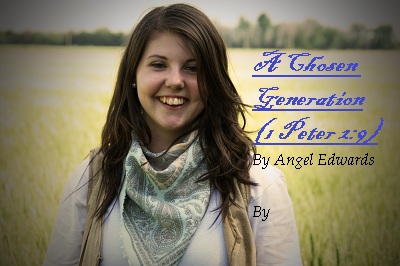 The early morning darkness made it nearly impossible to see anything out in front of me. The bone chilling wind was roaring in my ears, the breeze almost knocking me over. I struggled to focus straight ahead. My eyes shifted to the waves crashing below my feet. Fear washed over my entire frame as I fell into the depths of the sea. I was below the surface. The boat was too far away and so was He. I cried out in desperation.  It was then I felt it; His hand in mine. I knew then that everything was going to be okay. (Paraphrase of Matthew 14:29-31)

In faith Peter walks on water, becomes overwhelmed, sinks, and Jesus saves him. We’ve all heard the story. Peter always tries to do what he thinks Jesus wants. He desires to please Him. In this case he decides to be courageous and venture out onto the crashing waves. Why didn’t Jesus stand right by Peter before he fell in? Jesus only came to the rescue when Peter had lost his faith and he was powerless. Truth is Jesus was there the whole time. He knew what was going to happen. He also knew that Peter couldn’t do it in His own strength. It was only by grace through faith given by God that Peter could walk on water to begin with. So why is it then that we think the power is in us?

I’m included in this. I know that the Lord has been deeply challenging me to know and grasp onto His power and not my own; to surrender everything to Him. In our Christian walks we’re often given the false perception that we have to be strong. We say things like, “If I only would have tried harder… If only I could fix this problem in my life… If only I knew what to do with…” How often have I searched out my own thoughts thinking I could solve my own problems?
Nothing within our human nature is attracted to being powerless. This is precisely why God gets glorified through it.  The idea of needing to be “powerful” is formed within our society. We grow up thinking we need to have it “all together” or at least make it look that way. If we are weak then we are viewed as less than others. I have often believed that when I feel powerless I am disappointing God because I’m supposed to represent His strength as His ambassador. I have believed this lie for much of my life. God is the only source of power that there is. When I “feel” closer to God it’s not that I have been given more power by Him. It’s the idea that I am tapping into the main power source. I never have the power- it’s always an overflow from Him.

The fear of being powerless is rooted in pride and distrust. Pride in that we don’t want others to see us as weak. It hurts when others know we’re struggling. We want to always be perceived in an unrealistic light- one of steadfast power. I know that I have often believed that I will be seen as an immature Christian if I can’t handle tough seasons of spiritual attack. Rather than getting on my face before the Lord and seeking His strength, I try wading through the valley of filth on my own. I know the Lord is there but unlike Peter I tend to not call out immediately for help. It wasn’t until recently that I thought I was doing what He wanted me to do which was to fight. I focused on what I could do rather than on what He could do through me. As His co-conqueror I need Him there to fight with me.
For God to fight with us we have to rely on Him. If we’re powerless then someone must have the power. If it’s not within our reach then sometimes we feel as though we have lost all control but this is a lie from Satan. Power was never even ours. We never had it in our hands but Satan likes to make us believe we did. God is the only One who never loses power or control. As His children we have to trust that He wants to help us through the valley more than we want to be out of the valley. He is faithful to complete the work He’s started. Theses valleys are used to strengthen usin Him. It’s only until we have nothing that we realize He’s all we need.

Overall, I want to encourage those of you who feel alone in your struggles. There are seasons where all you see is the storm. It seems as though the sun will never come. Know that God sees you- in fact He is with you in the valley. The reason we can so easily rejoice on the mountain tops is because we’ve been able to experience the low points too. The amazing thing is that God is not just with you during the victories but also through the filth. Continue to seek His power, it’s the only power there is.